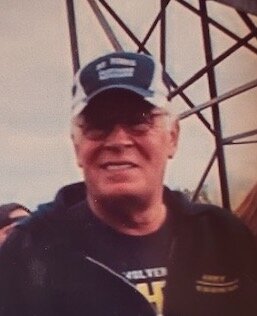 Please share a memory of David to include in a keepsake book for family and friends.
View Tribute Book

Age 76, of Mount Morris, died December 6, 2022, at home with his family by his side. A memorial service will take place at 2:00 pm on Thursday, December 15, 2022, at Martin Funeral, Cremation & Tribute Services, with Reverend John Montney to officiate. David’s family will be present to receive friends on Thursday, from 11:00 am until the time of service at 2:00 pm. The family has asked all friends attending the visitation and funeral to wear their favorite sports team attire. Memorial contributions may be considered to the Wounded Warrior Project at P.O. Box 758516, Topeka, Kansas 66675-8516. Envelopes will be available at the funeral home. Expressions of sympathy may be placed on David’s tribute page at martinfuneralhome.com.

David was born on September 20, 1946, in Flint, the son of Mr. and Mrs. Giles and Ardele (Lavigne) Neumann. Educated locally, David attended St. Mary’s Catholic School. After completing his education, David answered the call of his country and served in the United States Army from 1966 until his honorable discharge in 1972. Private First Class Neumann fought the enemy forces in Vietnam with courage as a helicopter gunner. He earned several medals and commendations, including the National Defense Service Medal, Air Medal, Armed Forces Expeditionary Medal, Vietnam Service Medal and the Overseas Service Ribbon. David was always exceptionally proud to have served his country, and he displayed all manner of patriotic décor in his home. Upon his return to civilian life, David became a union carpenter as a dedicated employee of Caruso Construction until his retirement. On April 13, 2006, David married the love of his life, Patricia Kay Rau, and the two shared a happy life until her sad passing in 2015. David was an avid sports fan, watching any game he could find on television. He especially loved University of Michigan football, Notre Dame football, and Tigers baseball. You could even find David watching professional bowling if there was nothing else on. David loved to work with wood, making several household items for the family. While he was working or watching the game on TV, you could count on David for a laugh. His family remembers that a serious word seldom came out of his mouth. He was loving and kind, with a tremendous sense of humor, and will be dearly missed.

David was preceded in death by his parents, his beloved wife, Pat, and sisters, Theresa Sturgill and Lynette Moore.