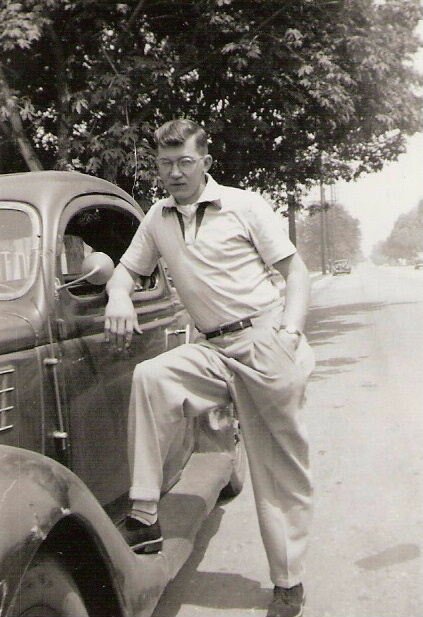 Please share a memory of Jack to include in a keepsake book for family and friends.
View Tribute Book

Age 94, of Mt. Morris, went home Thursday, May 12, 2022. A funeral service will take place at 11:00 am, at St. Mary’s Catholic Church in Mount Morris on Tuesday, May 17, 2022.  Rev. Fr. Roy Horning to officiate with cremation to follow. Burial will take place at Calvary Cemetery at a later date.  Jack's family will receive friends at Martin Funeral, Cremation & Tribute Services on Monday, from 4:30 pm until 8:00 pm; and on Tuesday, Jack will be taken to church to lie in state from 10:00 am until the time of service at 11:00 am. Expressions of sympathy and donations to the Catholic Charities may be placed on Jack’s tribute page on martinfuneralhome.com.

Jack was born April 19, 1928, in Chisholm, St. Louis County, Minnesota, the second-born child of three to Tony and Elva (Dahl) Pender. Moved to Flint, Michigan at around 10 years old for his dad to find work in the auto factory. Graduated from Flint Central High school, in 1946, also a college graduate. Jack served in the U.S. Army and fought in the Korean War from 1950 to 1952. While in California he tried a chew, which made him sick, and never did it again.

Jack met and later married Ilene (Whitlock) Pender on June 01, 1957, in Christ the King Church in Detroit, Michigan. He worked for G.M. Metal Fab as a Tool & Dye maker and retired after 36 years. He was active in many organizations: V.F.W., Eagles, Cooties, and Elks. He enjoyed hunting, bowling, golf, and fishing. After he retired, he had plenty of time to work on his yard, which he loved. When the children were young Jack would load up the car and the boat and take the entire family to various cottages around Northern Michigan.

He was preceded in death by his parents, his sister: Betty Garner, JoAnne Keel, a son John Pender and grandson Tyler Pender.