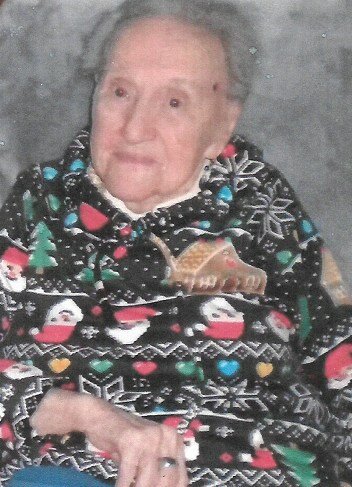 Please share a memory of Maizie to include in a keepsake book for family and friends.
View Tribute Book

Age 92, of Mt. Morris, died Monday, January 3, 2022, in McLaren Flint. In accordance with Maizie’s wishes, cremation has taken place and a private burial will be scheduled for a later date. Condolences may be shared with the family by visiting Maizie’s tribute page at martinfuneralhome.com.

Maizie was born in Flushing, Michigan on March 26, 1929, the daughter of Mr. & Mrs. Herman and Myrtle (Mills) Fairchild. Raised and educated locally, Maizie stayed in the Genesee County area where she worked at Trojan Laundry for almost ten years. Maizie met, fell in love with, and married Mr. George Gorecki on November 10, 1949 in Flushing, Michigan. Their union blessed them with four children. Maizie was a homemaker and loved spending time with her children. While raising their children they would often take trips up north to visit their parents. Maizie enjoyed shopping and going to local garage sales. She often had family get-togethers where her children requested her homemade chicken noodle soup, it was a family favorite. When not out and about Maizie enjoyed crafting and putting puzzles together, some of which are framed as proud accomplishments. Maizie was also known for her quilts, she loved making anyone a quilt, recently she donated quilts to the homeless shelter, City of Hope. Everyone who met Maizie could tell she was an independent, kind-hearted woman and she will be missed by many.

A Memorial Tree was planted for Maizie
We are deeply sorry for your loss ~ the staff at Martin Funeral, Cremation, and Tribute Services of Mt Morris
Join in honoring their life - plant a memorial tree
Print
Online Memory & Photo Sharing Event
Online Event
About this Event