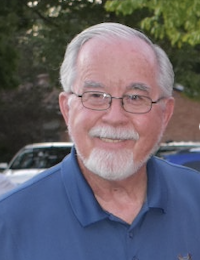 Please share a memory of Arthur to include in a keepsake book for family and friends.
View Tribute Book

Age 78, of Clio, passed away Saturday, December 4, 2021, at home with his family by his side. A Mass of Christian Burial will take place at 11:00 am, Thursday, December 9, 2021, at St. Mary Catholic Church in Mt. Morris. Rev. Fr. Roy Horning to officiate. Arthur’s family will be present to receive friends from 4:00 pm until 8:00 pm, on Wednesday, December 8, 2021, at Martin Funeral, Cremation & Tribute Services in Mt. Morris. At 6:30 pm, family, friends, and parish will gather to pray the Rosary, followed by a Knights of Columbus service at 7:00 pm. On Thursday morning, Arthur will be taken to church to lie in state from 10:00 am until the time of service at 11:00 am. Memorial contributions may be directed to St. Jude’s Children’s Research Hospital. Envelopes are available at the funeral home and the church. Expressions of sympathy may be placed on Arthur’s tribute page at martinfuneralhome.com.

Arthur was born in Flint on April 21, 1943, the son of Mr. and Mrs. Joseph Napoleon and Mary (Dolan) Laurin. Educated locally, Arthur attended St. Mary’s Catholic High School graduating with the Class of 1962. Arthur met his beloved Donna Slough, at a Halloween party in 1964. The two dated, fell in love and were united in marriage on September 4, 1965, at St. Mary Catholic Church. Arthur worked as a Job Setter for General Motors for 33 years, until his retirement in 1995. He also started his career in real estate where he started out with Earl Keim Realty and later went to work at Century 21 Signature. He was with the real estate companies for 40 years. Arthur was an avid golfer and was a member at Vienna Green in Clio for many years. He loved being with his family and enjoyed traveling to Lake Havasu and Higgins Lake where they made up family Olympics and competed against each other. Traveling to Arizona and eventually wintering in Florida were his favorite destinations. Arthur was a people watcher and enjoyed going to several casinos where he could observe and play KENO as he did not like to spend money. He had a wonderful sense of humor and was always calm and collected. The advice he gave was always cognitive and rational. Arthur was a member of St. Mary Catholic Church in Mt. Morris for 78 years as he grew up right behind the church. He was also a member of the Knights of Columbus #4285 in Mt. Morris. Arthur loved his children and grandchildren and spent as much time with them as he could. He was surrounded by his family during his final moments. He will be greatly missed.