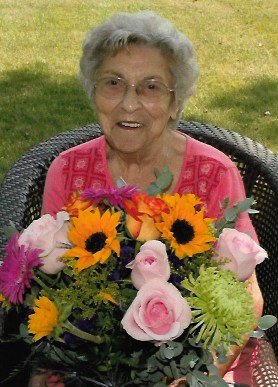 Age 95, died Monday, June 7, 2021, at Bella Vita Senior Living in Grand Blanc. Mass of Christian Burial will be celebrated in memory of Helen "Lorraine" at 2:00 pm on Friday, June 11, 2021, at St. Mary Catholic Church. Rev. Father Roy Horning to officiate and burial to follow at Calvary Cemetery. The family will be present to receive friends at Martin Funeral, Cremation & Tribute Services in Mt. Morris from 10:00 am until the time of prayers. Family and friends will then gather in procession to the church for Mass of Christian Burial at 2:00 pm. Those desiring may direct memorial contributions to the family. Condolences may be shared with the family on Lorraine's tribute page at martinfuneralhome.com.

Helen "Lorraine” was born August 3, 1925, in Saginaw, Michigan, the daughter of Mr. and Mrs. Elrick and Mildred (Spears) Raquepaw. Raised and educated in the Birch Run area, Lorraine graduated from Birch Run High School with the Class of 1942. After graduating, she moved to California where she met Robert Richard Shepard; the two were united in matrimony on January 12, 1945, at Blessed Sacrament Church in Hollywood, California; by Father C.J. McCoy. After raising their seven children; Rob, Mike, Chuck, Rex, Rita, Scott, and Lisa, Lorraine continued to dedicate her life to her family and her religion. Lorraine was a member of St. Francis Parish in Flint and recently an active member of St. Mary Catholic Church in Mt. Morris. In years past, she enjoyed gathering with her sisters for Oyster Stew during the holidays and making summer memories with them in the cottages at Atwood. She took great pride in attending her family reunions and their Christmas parties. She was known for the red velvet cakes she made for the birthdays celebrated on Harvard Street. Christmas would not be complete without her meat pies made from scratch.

Lorraine supported many charities. She often had a plate on her stove of bread scraps to feed the birds, and she always did more than she should have to help the down and out. She called herself the “farm girl” because she grew up on an 80-acre farm in Birch Run along with her nine brothers and sisters. She will be missed by all those who knew her.