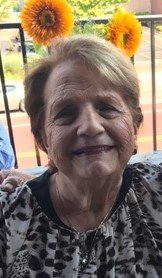 Age 85, of Mt. Morris, passed away unexpectedly from heart failure on Sunday, November 8, 2020, at McLaren-Flint. In accordance with Maxine’s wishes, cremation has taken place. Due to the ongoing pandemic, a private memorial mass will be held with a celebration of life for Jack and Maxine planned at a later date.  Memorial contributions may be directed to Powers Catholic High School or St. John Vianney Catholic Schools. Expressions of sympathy may be directed to Maxine’s tribute page at martinfuneralhome.com.

Maxine was born in Flint on September 18, 1935, the daughter of Mr. and Mrs. Merton and Rennetta (Orley) Parks. Maxine graduated from St. Matthew Catholic High School in Flint with the Class of 1953. Maxine would meet the love of her life and high school sweetheart, Jack Daniels. The two were united in marriage on August 27, 1955, at St. Matthew Catholic Church. They were blessed to celebrate 65 wonderful years together. Sadly, Jack preceded her in death on May 13, 2020. Maxine was a long-time member of St. Mary Catholic Church. When she wasn’t busy raising her children, Maxine volunteered at St. Mary Catholic School and later worked in the library at Powers Catholic High School.  Maxine loved meeting her friends from high school for lunch, something she kept up with until her untimely passing. Maxine loved to read, watch Hallmark Christmas movies, and to cook for her entire family  (unfortunately, the cooking gene wasn’t passed down to her kids, we’re still holding out hope for the grandchildren).  Maxine also enjoyed casino trips with her wonderful sister, Diane, (we’re sure the casino will miss Maxine!). She would always reminisce about her precious little brother Ray, lots of stories she would tell us. But most important to Maxine was her family and spending time with her 12 grandchildren, who will miss her unconditional love and the way she always told the girls to “put lipstick on."