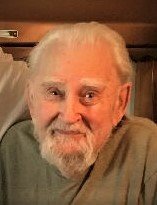 Age 90, of Burton, died Tuesday, April 14, 2020, in Flint. In accordance with Bill’s wishes, cremation has taken place. Bill will be interred at a later date as a Service Veteran at the Great Lakes National Cemetery in Holly. Please visit Bill’s tribute page at martinfuneralhome.com.

Bill was born on October 25, 1929, to Mr. and Mrs. Johan and Claudine Neilson of Burton, where he remained a life-long resident. Heeding the call to serve his country, Bill proudly served in the Korean War, with the Fifth Army Construction Engineering Division. Upon returning to civilian life, Bill went to work at General Motors Buick Assembly Plant in Flint, retiring with 35 years of service. A proud member of the UAW #599, Bill was also an antique car enthusiast and was the treasurer and founding member of the Genesee Gear Grinders Hotrod Club. Bill also enjoyed spending time at his cottage at Sand Lake.

Bill is survived by his sons: Michael Neilson and Steven and wife, Tracy Neilson; daughters: Renee and husband, Ronald Larmor, Christine, and husband Matthew Jones, and Lorraine Neilson, and their children and grandchildren.

Bill was preceded in death by his siblings Agnes (Neilson) Clothier of Clifford, and John Neilson of Grand Blanc.