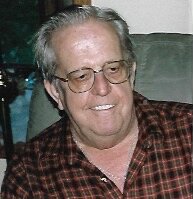 Please share a memory of Joe to include in a keepsake book for family and friends.
View Tribute Book

Age 88, of Flint, passed away January 16, 2023, at McLaren Flint Hospital, surrounded by his family. In accordance with Robert’s wishes, cremation has taken place. No further services are scheduled. Expressions of sympathy may be placed on Robert’s tribute page at martinfuneralhome.com.

Robert Eugene “Joe” Hansen was born October 5, 1934, the son of Mr. and Mrs. Ole and Swanhild (Olsen) Hansen. Educated locally, Joe graduated from Millington High School with the class of 1953. After high school, Joe answered his country's call and enlisted in the United States Navy. Upon returning to civilian life, Joe was a dedicated employee of AC Spark Plug, where he worked as a machinist until his retirement. Joe was a kind man, who never had a bad word to say. He was an avid reader, especially any James Patterson book he could get his hands on. He enjoyed sci-fi and mystery stories, whether on the page or on television. Joe was a sweet man, with an even bigger sweet tooth. Joe's favorite treats were cookies, cake, candy, and anything with chocolate. A favorite destination of Joe’s was Port Huron to fish and watch the freighters as they sent down the St. Clair River. He adored his family, especially the grandchildren. Joe will be dearly missed.

Joe was preceded in death by his parents, his brother, Harold, and the love of his life for over 30 years, Bobbie Jo Pruett.

A Memorial Tree was planted for Joe
We are deeply sorry for your loss ~ the staff at Martin Funeral, Cremation, and Tribute Services of Mt Morris
Join in honoring their life - plant a memorial tree
Print
Online Memory & Photo Sharing Event
Online Event
About this Event