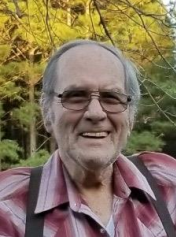 Glenn Howard Holt, age 94, of Clio, passed away on January 1, 2023, at Taylor Lodge. A private family service will be held at Martin Funeral Home, with burial at Great Lakes National Cemetery.

Glenn worked at GM/Buick in Flint as an electrician for 38 years and also taught and trained other student electricians. He was known as the one to call to fix any problem on the production line with a machine down, and if a part needed wasn’t available, he could make one. Skilled in many trades, he proudly built his own home where he enjoyed over 50 years on his small farm gardening with Fern and family, raising the best sweet corn, feeding the fish in his pond, and riding one of his John Deere tractors. He was locally known for his “you pick” blackberries and Christmas trees.

In his later years, with declining health, sorrow, and family loss to bear, those memories of the good days helped give him and the surviving family strength. The family would like to thank Tammy and Maddie Taylor and the family/staff at Taylor Lodge for their outstanding care and family support over the past few years and the Medical Team hospice care in recent months.

Glenn’s obituary was lovingly written by his family.

In lieu of online comments, please communicate expressions of sympathy directly to the family.

A Memorial Tree was planted for Glenn
We are deeply sorry for your loss ~ the staff at Martin Funeral, Cremation, and Tribute Services of Mt Morris
Join in honoring their life - plant a memorial tree
Print
Share A Memory
Send Flowers
Plant a Tree