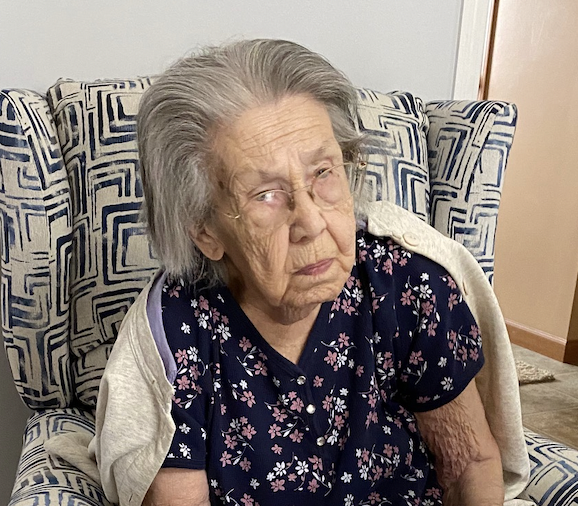 Please share a memory of Mary to include in a keepsake book for family and friends.
View Tribute Book

Mary Marie (Coon) Carson, age 98, passed away peacefully on Sunday, January 23, 2022, at Majestic Care of Flushing. Born on March 31, 1923, Mary grew up in Davison. She found her first job during World War II at Buick, polishing pistons for airplanes. It was there that she met her husband, Joe. She called her marriage to Joe her “favorite day,’ though she also noted that she “had a lot of favorite days.” In addition to her three children with Joe, Mary was a loving stepmother to J.R. (Elaine) Carson, Nora (Jim) Cantrell, Hollis (Barbara) Carson, and Anna (Gerald) Crawford. After Buick, Mary worked at St. Joseph hospital until her retirement. She enjoyed tending to her garden and spending time with her friend and neighbor, Bonnie Hyde. She was known widely for her ability to sew and her sharp, no-nonsense opinions. Her greatest joys, though, were spending time with her family, including her many grandchildren and great-grandchildren.

A funeral service will be held at 1:00 pm, on Thursday, January 27, 2022, at Martin Funeral, Cremation & Tribute Services in Mt. Morris. Pastor Brian Southerland to officiate, with burial to follow at Flint Memorial Park Cemetery. Mary’s family will be present to receive friends from 11:00 am until the time of service at 1:00 pm. Expressions of sympathy may be placed on Mary’s tribute page at martinfuneralhome.com.