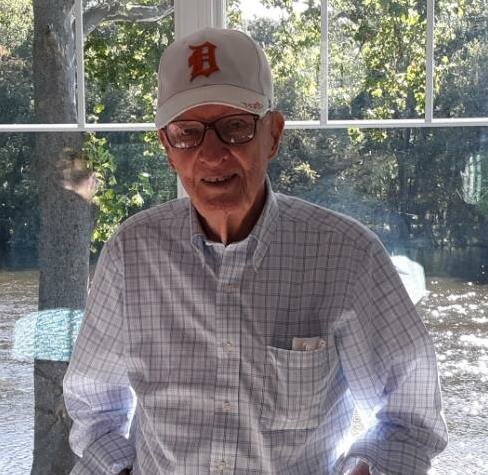 Age 94, of Clio died Friday, November 26, 2021 in McLaren Flint. In accordance with James’ wishes cremation has taken place. A private burial to take place on a later date. Those desiring may direct memorial contributions to Veterans Helping Veterans Association of Michigan. Condolences may be shared by visiting James’ tribute page at martinfuneralhome.com.

James “Jim” was born in Mountain View, Arkansas on January 24, 1927, the son of Mr. and Mrs. Clifton and Augestia (Satterfield) Stevens. As a young man, he heeded the call of his country, serving in the United States Army. Upon his return to civilian life, Jim met, fell in love with and married, Doris Wise in August of 1963, sadly she preceded him in death. In 2014, Jim met Nancy Walker, the two dated, fell in love, and were united in marriage in January 2014, sadly she preceded him in death. Jim’s career led him to Buick working in production until his retirement in 1974. Jim enjoyed fishing and playing cards with family and friends. He enjoyed traveling back and forth to Flordia where he was active in the Forest Area Lutheran Church for many years, helping with the fish dinners along with many other activities. Jim was a wonderful man, loving husband, father and stepfather. Jim not only loved his family but had special friends that would visit his porch, they called him Mr. Jim. Oh the secrets they shared will forever be safe with Mr. Jim up in Heaven. The laughter and memories will forever live on with all those who meet Jim.

The family would like to send special thanks to his many friends and neighbors: Sandie Lanford, his secret keepers: Natylea, Travis, Alysen Lanford, Ed, Stacy, David, and Mason. A very special thank you to Dr. Hak and his staff, Kindred Home Care, The American House of Grand Blanc, and the Medical Team who all cared to Jim throughout the years. Another specific thank you to United States Veterans Association and Erica Marochek for the support thoughout the years.