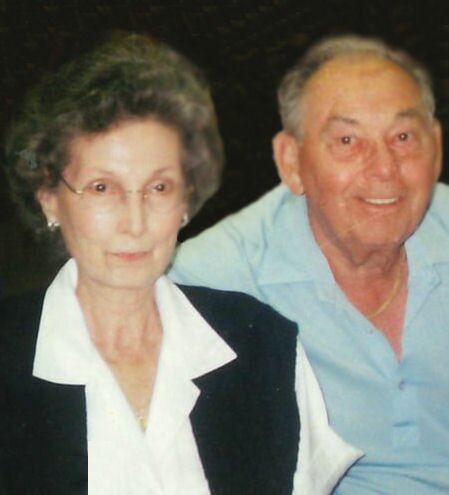 Age 95, of Flint, formerly of Burton, passed away peacefully in her sleep, Thursday, August 26, 2021, at home. In accordance with Grace’s wishes, cremation has taken place. A memorial service will take place at 2:00 pm, Tuesday, September 28, 2021, at Martin Funeral, Cremation & Tribute Services in Mt. Morris. Pastor Brian Southerland to officiate, with burial to follow at Sunset Hills Cemetery. Expressions of sympathy may be placed on Grace’s tribute page at martinfuneralhome.com.

Grace was born in Columbus, Ohio, on October 19, 1925, the daughter of Mr. and Mrs. Alex and Grace Elizabeth (McCormick) Teffner. Grace met her beloved husband, Marvin Gladen, at their place of work, and they were married on September 26, 1949 in Angola, Indiana. Sadly, he preceded her in death on February 9, 2009. Grace worked for AC Spark Plug making Aircraft spark plugs until her retirement in 1976. In 1981, Grace and Marvin built a retirement home in Sebring, Florida. Grace loved to travel with her family, and they went all over the United States, including visiting the White House when President Kennedy was in office. She enjoyed and took many cruises and trips including trips to Spain and Hawaii. Grace was a member of several clubs including a coin club, the Sebring Golf Club, and the Elks Club. Going to coin and jewelry shows were some of her favorite pastimes. Grace enjoyed spending time with the ladies from the golf club and loved having lunch with them. Reading was one of Grace’s passions with her favorite writer being Jeanette Evanovich. In her free time, Grace enjoyed gardening and had the most beautiful roses, crafting, knitting, but most important to Grace was spending time with her family.

Grace was preceded in death by her beloved husband, Marvin, parents, brother, and sister-in-law: James and wife, Shirley Teffner; and nephews: Patrick Teffner and James Teffner.

A Memorial Tree was planted for Grace
We are deeply sorry for your loss ~ the staff at Martin Funeral, Cremation, and Tribute Services of Mt Morris
Join in honoring their life - plant a memorial tree
Print
Share A Memory
Send Flowers
Plant a Tree