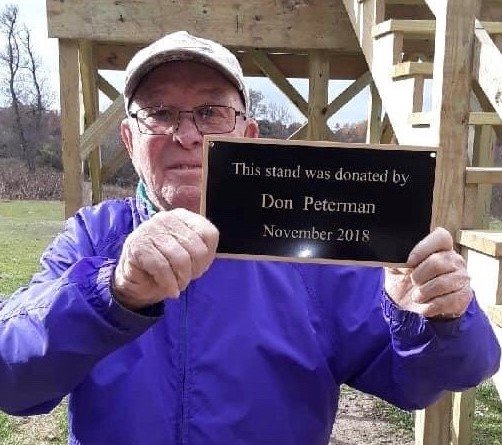 Don "Pete" was born in Whigville, Michigan on May 1, 1929, the son of Fredrick Eugene and Dulcie Sophia (Mitchell) Peterman.  Raised and educated in Grand Blanc, graduating with the Class of 1947. “To judge him rightly was to know him.”  -1947 Grand Blanc High School yearbook. Pete continued his education, completing 3 years of college before starting his career at General Motors. Working at the Fisher Body/Tank Plant for 42 years until his retirement in 1994. Pete met and fell in love with Patricia Sue Witherow, the two were united in marriage on July 5, 1953, sadly she preceded him in death on August 4, 2017. Pete was involved and enjoyed supporting his community. In 1957, Pete and 4 other Co-Founders developed the Grand Blanc Huntsman’s Club; he was honored for his dedication and lifetime commitment. He loved the outdoors. For over 40 years Pete and various friends and family members spent time in the Upper Pennisula camping, hunting and fishing. Being outside always put a smile on Pete's face; seeing his contagious smile would make everyone else smile. Most of all Don enjoyed spending time with his family.

In honoring all that is sacred with humility, gratitude, and grief, we share with you the life and death of our beloved father, brother, grandfather, great-grandfather, and friend. He left a legacy that can be matched by a few.

Forever in our hearts, he will be.