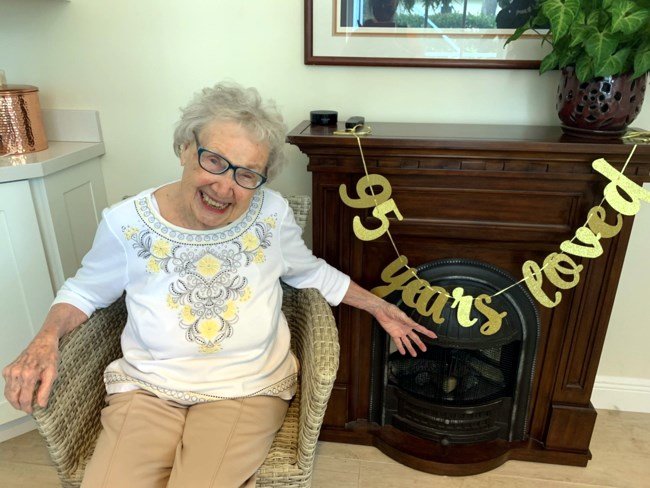 Suzanne passed away peacefully at the Cleveland Clinic in Weston, Florida on October 16, 2020 at the age of 95. Suzanne was born on July 2, 1925 above the family jewelry store in her lifelong hometown of Vassar, Michigan. She was the eldest child of Davis J. and Charlotte L. (Vasold) Wightman.

Suzi as she was called by those close to her would live in those two stories above the store through the depression and World War II with her parents and her paternal grandmother, Alena until her graduation from Vassar High School. She left Vassar to attend the University of Michigan in Ann Arbor to study psychology where she would later meet John Leipzig, a WWII Army Air Corp Navigator whom she would marry upon graduation. Not long after beginning her married life she became a mother of two children first a son, John, and then a daughter, Kristin. After their divorce she returned to her parents in Vassar to raise her children above the family jewelry store. It was in Vassar that Suzanne began and completed her lifelong vocation as an educator, as a teacher and elementary school principal. Most of her teaching career was spent in the Vassar Public Schools where she was twice the principal of Townsend North Elementary School, the final time coming out of retirement to serve the schools on an interim basis. Suzanne completed a MSW in Social Work at the University of Michigan later in her career and became a school social worker at the Tuscola County Intermediate School District in Caro, Michigan. Forty years after her retirement, former students and co-workers still speak about how wonderful it was to be in a class with or work with Mrs. Lane.

After years of dating, in 1965 Suzanne wed Harold Lane which began a beautiful and loving partnership of over 25 years until his passing in 1991. In addition to having a full-time career, Harold renovated old homes in the Vassar area. Suzanne convinced Harold that together they could restore the Victorian Townsend North Mansion to its former glory which upon completion was to become their home for a number of years. They also renovated the entire Wightman Jewelry building where Suzanne was to live during her later years in Vassar. Desiring a property on the Great Lakes which could be used for family gatherings, in 1979 Suzanne and Harold purchased a beachfront cottage on Sand Point on the Saginaw Bay of Lake Huron. While they enjoyed the cottage during the entire year, it was most important for them to have a place that their children and grandchildren could come during the summer and have lifelong experiences with their Grandma and Grandpa Lane. The plan could not have worked better as five grandchildren had been born. The cottage at Sand Point was the perfect place for young families to come and to congregate and to spend time with their grandparents. The grandchildren still talk about swimming, fishing, sailing, playing in the sand as well as crafting, playing all sorts of games and of course ice cream with their Grandma and Grandpa Lane whom they absolutely adored.

When not entertaining family, Suzanne was extremely active in her Vassar community working on numerous boards and community projects over the years. Most notably, she served on the Board of the Tuscola County Habitat for Humanity on the Board of Directors for the Downtown Development Authority of Vassar and for over 35 years was known for her work on the Keep Vassar Beautiful Campaign's Petunia Committee that ensured the streets of Vassar were lined with petunias.

In her late 80's Suzanne began to share her time between the Jupiter, Florida area where her daughter lived and Vassar. Each subsequent year she would spend more time in Florida and less in Vassar always making sure she was back to help with the petunias. Finally after her 90th birthday celebration Suzanne decided to move permanently to Florida. The independent living community of Allegro (Addington Place) in Jupiter provided Suzanne with companionship and an active lifestyle including bridge, canasta and mahjong, in other words Suzi did not slow down much at all.

Suzanne was preceded in death by her husband Harold and her parents Davis and Charlotte.

Cremation has taken place and a memorial service will be held 11:00 am on Friday, June 18, 2021, at Martin Funeral, Cremation & Tribute Services in Vassar. Pastor Scott Sherrill to officiate. The family will be present to receive friends from 10:00 am until the time of service at 11:00 am. In lieu of flowers please feel free to donate to a charity or organization of your choice in Suzanne's memory. For those who would like to to view the funeral via facebook, please speak with the family to obtain an invitation.

Suzanne's obituary was lovingly written by her family.