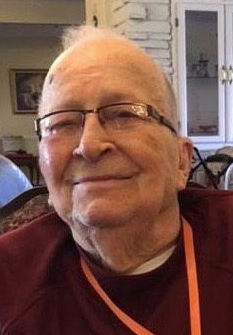 Age 95, of Clio, passed away Wednesday, October 7, 2020, at Gross Assisted Living with his family by his side. A private burial will be held at Pinegrove Cemetery. A memorial service will be announced at a later date. Contributions in Ed's memory may be considered to Adopt-A-Pet Inc. in Fenton. Expressions of sympathy may be placed on Ed's tribute page at martinfuneralhome.com.

Ed was born in Wallaceburg, Ontario, Canada, on March 6, 1925, the son of Mr. and Mrs. Joseph and Irene (Christen) Toulouse. Raised in Wallaceburg, Ontario, Canada, Ed was educated locally. When he was younger, Ed enjoyed scouting, hunting, fishing, chasing girls, and catching a very special lady whom he spent the rest of his life with. Ed proudly served in the Canadian Navy during World War II, from December 17, 1943, to November 1, 1945. While serving, Ed married the love of his life Roxanna Ross, on June 20, 1944. Upon his honorable discharge, Ed returned to Wallaceburg, Ontario, Canada, before the couple moved to the U.S. After immigrating to the United States, Ed lived in Chicago, working for Ford Motor Company as a journeyman. In the mid-1950's Ed and Roxy moved their family to Flint, where Ed worked as a journeyman and foreman for GM at the V-8 Engine Plant until his retirement. In his free time, Ed enjoyed woodworking, sending humor and biblical hope to others, and reading.