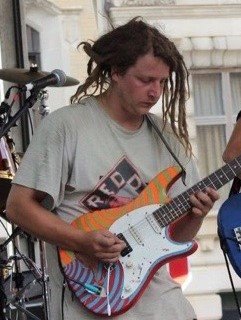 Age 33, of Flint, formerly of Clio, died Sunday, September 20, 2020, at home. In accordance with Thomas' family’s wishes, cremation has taken place. Memorial contributions in Thomas’ name may be directed to the Flint Institute of Arts. Expressions of sympathy may be placed on Thomas’ tribute page at martinfuneralhome.com

Thomas was born in Phoenix, Arizona, on June 2, 1987, the son of Dawn Hartwell. Raised and educated locally, Thomas graduated from Clio High School with the Class of 2005. Artistic and musically gifted, Thomas worked in the art and music industry in the Flint area. He had a love for playing the guitar. Thomas was also well known for his skill in the trades. He enjoyed skateboarding and snowboarding. In his free time, Thomas enjoyed collecting oddities.

Thomas was preceded in death by his grandparents: Ronald and Doris Hartwell.