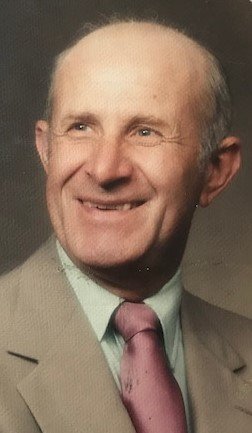 age 93, of Mt. Morris, died at home Friday, May 15, 2020, surrounded by his family. A private funeral service will take place on Friday, May 22, 2020, at Martin Funeral, Cremation & Tribute Services, with burial to follow at Great Lakes National Cemetery. Memorial donations can be made in Joseph’s honor to Carriage Town Ministries. Please visit Joseph’s tribute page at martinfuneralhome.com.

Joseph was born July 22, 1926, in Humenne, Czechoslovakia. As a young man, Joseph moved to Michigan to start a new life. Upon his arrival to the United States, he was drafted into the United States Army where he proudly served his country in the Korean war.  After his honorable discharge, Joseph would find work at General Motors-Turnstedt, where he worked for 30 years, until his retirement in 1983. It was there he met the love of his life, Eva Serban. Joseph won her over with his ability to speak Hungarian. Joseph and Eva were united in marriage in January of 1956. Their union would bare five beautiful children. Joseph was a devout member of St. Michael’s Byzantine Catholic Church for over 65 years, and he was a Cantor there for 40 of those years.  Joseph loved being Up North at the cottage he built on Higgins Lake in 1971. Joseph was the President of the First Catholic Slovak Union, branch #633, for 32 years and then went on to become Treasurer for an additional 12 years.  In his free time, Joseph enjoyed Polka dancing, playing tennis, traveling, watching soccer, and hockey, especially the Detroit Red Wings. The family would like to extend their sincerest thanks to the staff at Ascension Genesys Reverence Hospice for their love and outstanding care.

Joseph was preceded in death by his parents.

Plant a Tree
Print
Friday
22
May