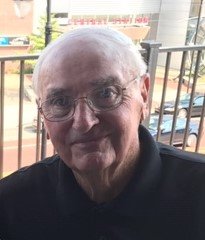 Jack passed away peacefully to join his daughter Karen Wolbert, son John Daniels, son-in-law Scott Shepard and son-in-law Dan Adams. He was born in Flint on August 16, 1935. A date his grandkids will never forget. He wrote 8/16/35 on water bottles, soccer, and baseball bags. He would write on anything, just to remind them of the date.

Jack married the love of his life, Maxine Parks, on August 27, 1955, at St. Matthew Catholic Church. He graduated from St. Matthew High School and went on to graduate from Central Michigan with a Masters of Education. Jack started his teaching career at Holy Redeemer, Sacred Heart, St. Mary’s Mt. Morris, Lowell Junior High, and Holy Rosary. He finished his teaching career as a Principal at St. Mary’s Mt. Morris. Along with teaching, his favorite pastime was coaching football at Holy Rosary and Powers High School. He loved coaching and the camaraderie of being with all of the coaches and players. If you were ever lucky enough to be called a “bone head” by Jack, you knew you were liked. Jack was inducted into the Greater Flint Area Athlete Hall of Fame in 2001. He was an active member of St. Mary’s Mt. Morris church for over 50 years.

Jack is preceded in death by his beloved daughter, Karen Wolbert; his beloved son, John Daniels; and sons-in-law, Scott Shepard, and Dan Adams.

The family would like to extend a special thanks to Lisa at Cardinal Hospice, Marcie, and the staff of Cranberry Park and McLaren Physical Therapist, Theresa Calleja, for her care and support. We also want to thank Rick and Kaley from McLaren ER for showing us so much kindness.

Jack’s obituary was lovingly written by his family.