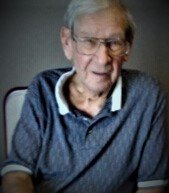 Age 89 of Saginaw Township, formerly of Lansing, died on Tuesday, May 12, 2020, at HealthSource Saginaw. A private graveside service will be held on Tuesday, May 19, 2020, at Brookside Cemetery in Fairgrove, with burial to follow. Memorial donations may be directed to the Alzheimer’s Association. Please visit Moe’s tribute page at  martinfuneralhome.com.

Moe was born on December 6, 1930, in Caro, the son of Mr. and Mrs. Mark and Mildred (Wieland) Nowland. Raised in Caro, Moe was educated locally, graduating from Caro High School with the Class of 1950. Moe was very athletic, participating in football, basketball, and baseball, While in high school, Moe would meet the love of his life, Ruth Hall. After graduation, Moe and Ruth were united in marriage on June 18, 1952; and on the same night, Moe shipped out to Oklahoma for Boot Camp to proudly serve his country in the United States Army.

Upon his honorable discharge, Moe returned to Michigan, and the couple moved to Mt. Pleasant to attend Central Michigan University. After graduation, Moe worked for the State of Michigan as a computer analyst, retiring in 1989. In his free time, Moe enjoyed spending time with his children and grandchildren. Moe was an avid golfer, could fix anything, and was a member of the Grand Ledge Country Club,  Les Dancers, and Bolee Group.

Moe was preceded in death by his parents; son, Dean Nowland; and sister, Doris Turner.