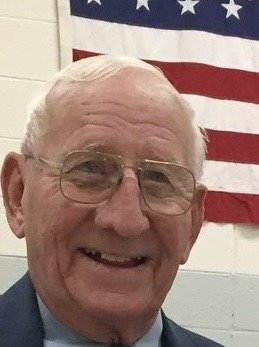 Age 86, of Richville, died suddenly, early Monday morning, April 13, 2020. A memorial service to celebrate Alvin's life will be announced at a future date. Memorial donations may be directed to St. Michael's Lutheran Church in Richville or the Alzheimer's Association. Please visit Alvin's tribute page at martinfuneralhome.com.

Alvin was employed by Saginaw Steering Gear, retiring after 39 years of service in 1992. Heeding the call to serve his country, Alvin joined the United States Army during the Korean War. He was a member and past commander of the Richville American Legion Post #400.  Alvin was also a member of St. Michael's Lutheran Church in Richville, and he enjoyed golfing, gardening, and feeding the neighborhood birds.

Alvin leaves to cherish his memory, two daughters and their spouses: Gail and Richard Littleton of Reese, and Bonnie and Tom Ellison of Richville; two sisters: Darlene Werschky of Sebewaing and Loretta and Jack Boothe of Macomb Twp; two granddaughters: Charlene and Marc Baase of Vassar and Katelyn and Josh Reiss of Midland; four great-grandchildren: Aubrey and Cayden Baase and Hayden and Gabriel Reiss; and several nieces and nephews.