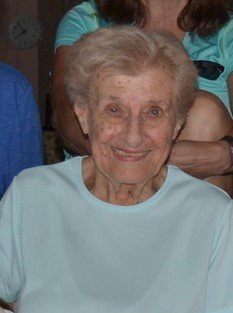 Age 96, of Mt. Morris, died on Thursday, March 26, 2020, at McLaren-Flint.  A private burial will be held at Sunset Hills Cemetery, with Rev Fr. Roy Horning officiating.  A Memorial Mass will be celebrated in Irene's honor at St. Mary Catholic Church in Mt. Morris, the date and time will be announced. Memorial donations may be directed to the National Kidney Foundation of Michigan.

Irene was born in Flint on September 14, 1923, the daughter of John (Janos Tarr) and Jeanette (Nagy) Thor. Raised in Flint, Irene graduated from Flint Central High School with the Class of 1940. While in high school, Irene would meet Robert Kirby. The two dated, fell in love and were united in marriage on September 21, 1943, in Flint. Irene was a busy homemaker, tending to all of her family's needs, and was a longtime member of St. Mary Catholic Church. Irene enjoyed staying current on world and business affairs and the stock market, watching golf, traveling, playing cards, and gardening.

Irene was preceded in death by her parents; two sisters: Velma Matthews, and Eleanor Marshall; and brother-in-law, Cooper Matthews.