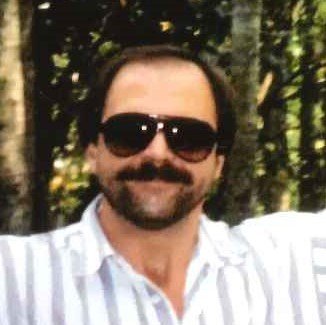 Age 66, of Mount Morris, died Friday, September 27, 2019, at home. A Celebration of his life will take place at 2:00 pm, Friday, October 11, 2019, at The Fenton Gazebo, 301  S. Leroy St., Fenton, MI 48430. Eddie’s family will be present to receive friends, at Martin Funeral Cremation, & Tribute Services in Mt. Morris from 5:00 pm to 8:00 pm on Thursday, October 10, 2019. Those desiring may direct memorial contributions to Cell Phones for Soldiers, or the Hurley Foundation. Donations may be made through Eddie’s memorial page at martinfuneralhome.com, or envelopes are available at the funeral home.

Eddie was born September 9, 1953, in Welch, West Virginia; the son of Mr. and Mrs. Glen “Buddy” and Katherine (Estep) Jackson. Educated locally, Eddie graduated from Fenton High School in 1972. Upon his graduation, Eddie went to work for General Motors. After he left the plant, he would go on to begin his illustrious 35-year career as a carpenter. Eddie’s work could be found in Detroit’s home magazines.  When he was not using his hands to craft homes, Eddie could be found playing his guitar. Coming from a family of musicians, Eddie was a guitar virtuoso. He played in various bands throughout his life, but his most notable was “Alex Jesse” founded in the 1980s.  Although a bright light has been dimmed, his legacy of music and craftsmanship will live on.

He was preceded in death by his parents, and brother, Benny Jackson.

The family would like to extend a special thank you to the nurses at Hurley Medical Center’s 9 East and the Medical Team Hospice.