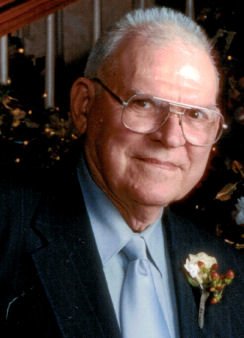 Jack Harold Trisch, age 96, of Caro, passed away Friday, September 14, 2018, at the Tuscola County Medical Care Facility. The funeral service will take place 11:00 am, Tuesday, September 18, 2018, at St. Paul Lutheran Church, 503 S. State St. in Caro. Jack's family will be present at the Martin Funeral Home in Fairgrove to receive friends on Monday, from 2:00 pm until 8:00 pm. On Tuesday morning, Jack will be taken to the church to lie in state from 10:00 am until the time of the service at 11:00 am.  Pastor Cameron Steele officiating with burial to follow at Indianfields Cemetery. Those desiring may consider memorial contributions to St. Paul Lutheran Church or to the charity of choice. Envelopes are available at the funeral home and church.

Jack was born in Caro, on January 23, 1922, the son of the late Mr. and Mrs. John and Grace (Scott) Trisch. He married the love of his life, Verna Buerkel on December 3, 1944, in Bay City. Sadly, she preceded him in death after 55 years of marriage on September 27, 2000. Jack opened Victor Drag Company in Caro in 1964 and was the owner-operator with his son, retiring together on January 1, 2013. Prior to retirement, Victor Drag Company sold Interstate batteries, tires, Carhartt clothing, and general hardware supplies. He was also known for his fresh roasted peanuts. He enjoyed spending time with family and friends, vegetable gardening and farming. Jack had a passion for music and could play numerous instruments. Jack was also a collector of many antiques - including gas pumps, lanterns, and old-fashioned radios and farm memorabilia. He was a long-time member of St. Paul Lutheran Church in Caro.