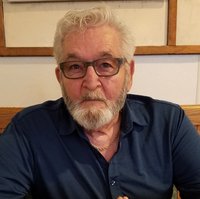 Age 80, of Vassar, passed away Wednesday, December 24, 2020, at Detroit Receiving Hospital. A funeral service will take place at 2:00 pm Wednesday, December 30, 2020, at Martin Funeral, Cremation & Tribute Service in Vassar. The family will be present to receive friends at the funeral home from 10:00 am until the time of service at 2:00 pm. Pastor Kevin Dixson to officiate with burial to follow at Eastlawn Memorial Gardens. Expressions of sympathy and memorial contributions may be placed on Robert’s tribute page at martinfuneralhome.com.

Robert was born in Saginaw on May 27, 1940, the son of Mr. and Mrs. Cecil Clare and Marion Elizabeth (Vieau) Hascall. Robert was born and raised in Vassar. At the age of 16, Robert ran away and joined the carnival. When he turned 18, he returned home and proudly enlisted in the United States Marines from February 24, 1960, until his honorable discharge on February 20, 1964. Robert was married to Joyce Burrows on May 29, 2004, at Tuscola Assembly of God. Robert was a commercial truck driver for Leach Trucking for the last 22 years. He had a passion for working and worked until he was no longer able. Robert was blessed to have been able to visit every state in the nation. In his younger years, Robert worked for an armored trucking company and then went to work for 7-Up bottling company. He was known as a jack of all trades. Taking trips to Las Vegas with his beloved Joyce and spending time together at the casino were two of the past times he enjoyed most of all. Robert was very knowledgeable about most everything. He had a great sense of humor and was a big jokester. Robert was a wonderful family man and took great care of his family. He was the most loving and giving man you could ever meet. Along with his family, Robert had a special love for his five Shih Tzu’s. He will be greatly missed.