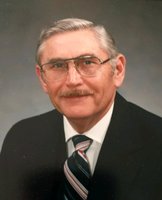 Age 94, passed away on Saturday, October 24, 2020, after a brief hospitalization. There will be a private graveside service officiated by Bernie’s nephew, Larry Nelson, pastor of Bray Road Baptist Church in Clio, MI. Expressions of sympathy may be directed to Bernie’s tribute page at martinfuneralhome.com.

Bernie was born to Mr. and Mrs. Gladys and Glenn Dunn in Flint, MI.  Bernie attended the Stanley School, which is now in Crossroads Village, and graduated from Mt. Morris High School with 76 children in his senior class in 1944.  He enlisted in the United States Navy in his senior year.  Bernie served in the Pacific Theater during WWII as a carpenters mate on the USS Clay.  He came home on leave in May 1945 to take Ruth Babcock to the prom, and they were married in August 1946.

Bernie loved to dance, roller skate, ice skate, pheasant hunt, fish, trailer-camp, and later in life was an avid golfer.   Bernie was a devoted husband, father, and grandfather.  He was a man of faith and a longtime member of Calvary Presbyterian Church, where he served as a Deacon, Elder, and Stephen Minister.  Bernie worked as a carpenter, millwork superintendent, and estimator for Eddy Lumber Co., S&M Lumber Co., Flint Lumber Co., and retired from Michigan Lumber Co. After retirement, Bernie continued working as a carpenter restoring railroad cars at Crossroad Village in Flint with national recognition. He & Ruth enjoyed winters in Lake Wales, Florida, for a number of years.  In 2011 Bernie & Ruth moved to Brecon Village in Saline, MI.  After Ruth passed, Bernie stayed on and actively enjoyed the community.

Bernie will be missed by many friends, cousins, & other relatives.  He is survived by his cousin: Ardith Goodroe of Flint; his children: Bruce L. (Diane)Dunn of Flint, Jeanette L. (Barry) Swartz of Saline, and Vivian A. (Toby) Hall of Flint & was very proud of his seven grandchildren, eight great-grandchildren, and two great-great-grandchildren.

Bernie's obituary was lovingly written by his family.