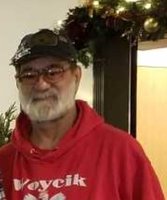 John graduated in 1967 from Caseville Public Schools. John was on the varsity football teams from North Huron School and Caseville School.

John was a laborer for Pigeon Manufacturing in Pigeon, Michigan for 22 years.

John loved playing pinball, skating rinks, bowling, winning stuffed animals at claw machines, camping, going to the casino, Tiger’s games with his brother-in-law Roger, shopping at Menard’s, being around his grandchildren and great-grandson, hanging out with family and friends.

John was preceded in death by his parents: Ernest and Ilene Woycik; and his brother: Philip Woycik.

Obituary loving submitted by the family.