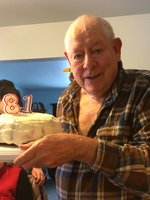 Jim was born January 31, 1938, in Saginaw, Michigan, the son of Mr. and Mrs. Thomas and Jessie (Smith) Pierce. Raised in Vassar, he graduated from Vassar High School in 1957.  He and Lavone Gibbs were united in marriage, and she predeceased him in 2009. Jim worked for Gredy Foundry for 30 years, retiring in 1988. He enjoyed ice fishing, hunting, playing cards, camping, and spending time with his family. Jim is known for his quick wit and his great sense of humor.