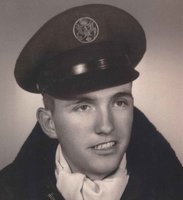 Ervin W. Mayhew, Jr., age 82, of Saginaw, formerly of Beecher, passed away Friday, February 1, 2019, at Wescourt Assisted Living with his family by his side. A Memorial Service will be held on Wednesday, February 6, 2019, at 11:00 am at the Martin Funeral, Cremation & Tribute Services in Mt. Morris. Chaplain Mark Oswald officiating with cremation to follow. Ervin's family will be present to receive guests at the funeral home on Tuesday from 4:00 pm until 8:00 pm. On Wednesday morning, from 10:00 am until the time of the memorial service at 11:00 am. Those desiring may consider memorial contributions to the Alzheimer's Association in recognition of his wife, Betsy. Envelopes are available at the funeral home.

Ervin was born in Flint, on June 28, 1936, he is the son of the late Mr. and Mrs. Ervin W. and Yvonne (Malhot) Mayhew, Sr. He graduated from Beecher High School with the class of 1955. He proudly serviced in the United States Air Force for four years, earning his honorable discharge on February 1, 1960. He married Betsy on April 16, 1981. Ervin worked in Skilled Trades for A.C. Spark Plug for over 30 years, retiring in 1990, and was a long-time member of UAW Local #651. He was a devoted husband, and father. In his free time, Ervin enjoyed spending time with family and friends, golfing, and watching the PGA Tour on TV, bowling, and chess. He was also a world-class bridge player and was a member of the Saginaw Bridge Club.

Ervin’s family would like to extend a special thank you to the staff of AHHC American Home Health & Hospice Care in Saginaw and to Safe Hands Warm Hearts in Saginaw for all the care they gave.